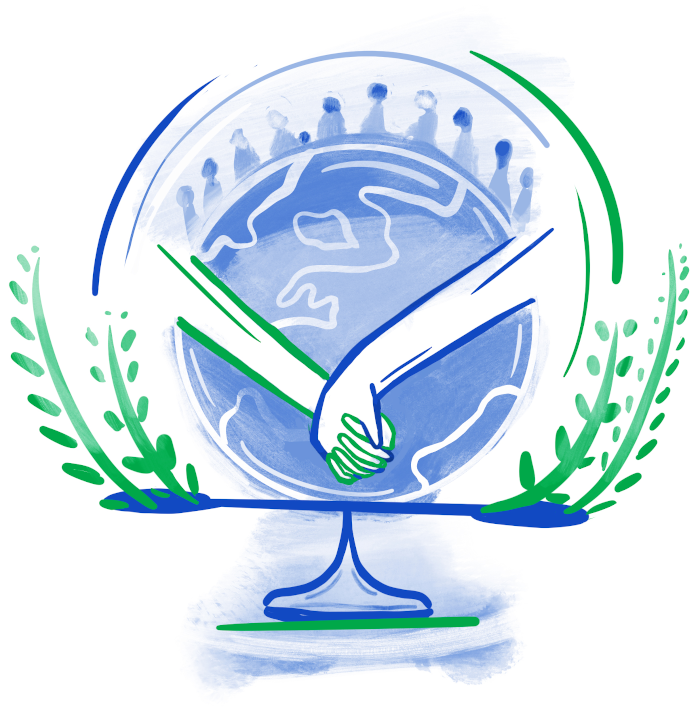 The grassroots climate action plan aims to consider the aspects of global justice and intersectionality in all its areas and measures. However, since these aspects are particularly important to us and we also want to include them if they have no directly measurable → greenhouse gas saving effects, there is this area.

Our way of living and doing business is currently based on competition and thus the pressure to grow and produce more cheaply. To ensure this, natural resources and people are exploited and excluded from the created wealth. This process is constantly widening the gap between rich and poor, both within societies and especially on a global level. States in the global north mostly benefit from this, as they maintain their historically grown position of power, often enforced with mere force, through (neo) colonial structures of oppression and dependency. In the context of the climate crisis, the aspect of justice is particularly essential, since the countries that have historically contributed most to the climate crisis and still do (Germany is one of the ten industrialized countries worldwide, which together generate 66 percent of global CO2 emissions) who are least affected by the consequences and, thanks to their wealth gained through exploitation, are best able to adjust to the consequences. Since the grassroots climate plan is not only tailored to Germany, but is also drawn up here, what can be considered "from below" often still has to be recognized as privileged from a global perspective. We therefore try to be in contact with emancipatory movements from particularly affected areas, which are often in the → global south, and to incorporate their perspectives into the plan.

A few words on intersectionality:

As the example of global justice shows, climate justice has a lot to do with different concerns of different identity categories, since these conditions are also maintained because people who are regarded as white are not aware of their privileges. But also the younger generations - and even more so the next ones - are more affected than the older and current generations. Not in every individual case, but generally speaking, women are more affected than men, poor people more than rich, etc. Thinking together all these aspects is expressed with the term intersectionality. These are not natural inequalities, but there is always a "keep it up!" through the little (er) affected identity categories, and thus to maintain unjust conditions. It goes without saying that we consider intersectional aspects in the measures. Therefore, there is a separate section in each measure for potentially questionable aspects and why this measure could be particularly helpful from an intersectional perspective - in other words: why it seems important to achieve an emancipatory society. However, we are aware that this is not obvious in the vast majority of measures. This may be because they don't touch intersectional injustices. It may also be due to the fact that the diversity among the co-authors has so far not been sufficient to identify critical points here. We therefore invite you to comment critically on the entire plan based on your own concerns; We are particularly happy about corresponding extensions.

Living up to postcolonial responsibility