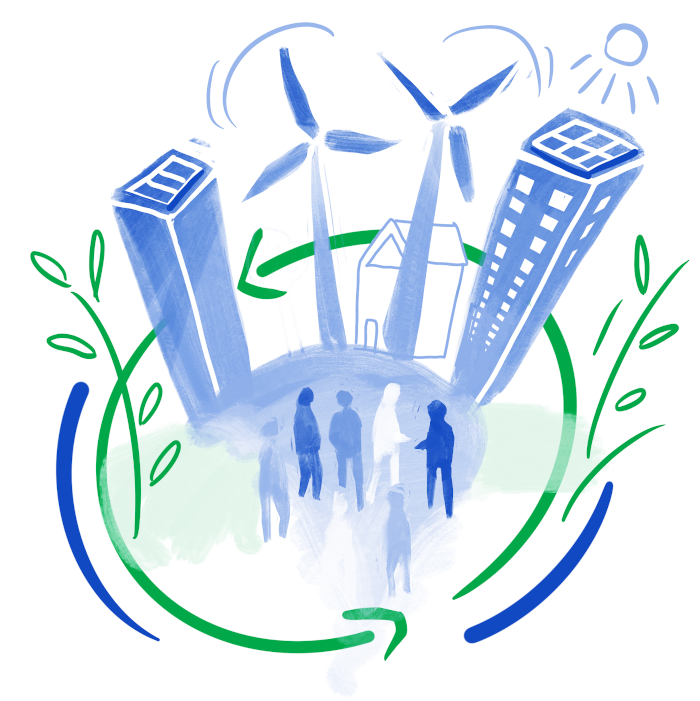 We need a fast and fundamental transition to achieve the drastic reductions of greenhouse gas emissions which are especially necessary in the energy sector. The most important step is the exit from fossil-fuel energy, notably lignite. Renewables can partly compensate the loss of power, but there is no way around a reduction of energy consumption. This is not negotiable: On the one hand the growth of renewables is the subject to certain technological and economical limitations (although right now those are far from being reached). On the other hand fossil fuels cannot be a serious option in the face of (depending on the calculation) already surpassed or almost reached CO2 budgets of germany. Neither is importing power, since Germany's neighbouring countries are even slower when it comes to building up renewable energy production.  To ensure that the remaining energy resources are distributed fairly, i.e. that the most solvent (energy) needs are not exclusively satisfied, thus preventing energy poverty, a far-reaching [democratization of the energy economy is unavoidable. (More on this in the next section)

What does "energy democracy" mean?

The principles of energy democracy are a collective and decentralised organization, that suplies energy based on renewables. The collectively decided needs are determined by the technical realization, the amount of produced energy, as well as its purpose. Thus, consumer participation in a grassroots way is vital. The citizens will support the decisions made on a local level and with the use of e.g. collectives or participatory discussion formats in municipalities. This allows benefits and costs to be shared fairly. With citizen*energy, the supply can be shaped socially just and ecologically.

Coal exit - scenario "all but Datteln 4"
Every year ¼ of coal-fired output (installed output) is shut down and deactivated, starting in 2020, until all coal-fired power plants are off the grid by 2023 (except Datteln 4). Compensation of the
Basic income model project to accompany the phase-out of lignite
The lignite phase-out was and still is an example of how ecological and social concerns are played off against each other. This leads to a split in society and to great resistance to the phase-out of
Abschalten von Kohle - Umstieg auf erneuerbare Energienedit public
Der deutsche Strommix beinhaltet 30,1 Prozent (3) Energie aus Kohleverstromung (2019). Gleichzeitig ist dieser Anteil für 8,3 Prozent des CO2-Ausstoßes von Deutschland (4,5) verantwortlich. Um dage

Democratization of the Energy Economy