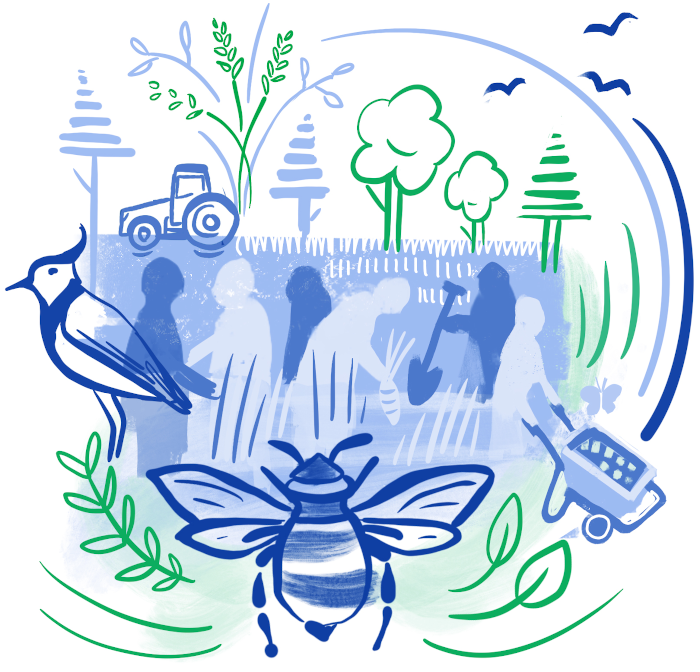 According to the IPCC Special Report of August 2019, 23% of current human-made → greenhouse gas emissions are attributable to agriculture, forestry and other land use. However, if all elements, e.g. inputs, infrastructure, etc., and all activities, e.g. processing, distribution and transport, etc., of the global food system are included, emissions are as high as 37%. Globally, most of the emissions from the food system are caused by livestock production. In particular, changes in land use, such as deforestation for growing animal feed or for use as pasture land, are driving climate change. The degradation of the soil itself and the production and use of → chemical synthetic fertilizers also emit enormous amounts of → greenhouse gases into the air. The most important part of global methane and nitrous oxide emissions is also attributable to animal husbandry, for example through the spreading of animal excrement or the decomposition products from the digestion of ruminants[1]. The current model of industrial agriculture is also responsible for enormous social inequality and human suffering here and worldwide: expulsion of small farmers* and indigenous people from their land for the cultivation of large → monocultures (landgrabbing), pesticide poisoning, as well as malnutrition and hunger due to the unequal distribution of means of production, such as land and water.

In order to significantly reduce emissions from agriculture and forestry, to make soil and forests the natural greenhouse gas sink (→ sink) again and to strengthen social justice, a radical reorientation of → agricultural policy is needed. But we are confronted with a process of power concentration in the agricultural and food sector. For example, six companies dominate the global production of pesticides and seeds. In addition, international trade agreements, → subsidy systems and genetic engineering legislation are being passed largely without those directly affected having a say.[2]

Food Sovereignty & Agroecology: Our active shaping of the agricultural turnaround

We therefore consider it important to orient ourselves to the political concept of → food sovereignty. By food sovereignty we mean, following the 2007 declaration at the Nyéléni Forum in Mali[3], the right of people to shape their own food and agricultural systems democratically without harming other people or the environment. This requires the establishment of democratic systems and procedures that are free of violence and the influence of corporations and based on equal rights for all and gender equality.

Agroecology, in turn, is a scientifically sound concept based on ecological principles, the approach of food sovereignty and the right to adequate food. This is demanded by social movements such as the international smallholder movement La Via Campesina. Farmers, processors and consumers are the protagonists of a socially just and ecologically sustainable transformation of agricultural and food systems. Together we can fight for a favourable political framework[4].

Central Elements of Agroecology are:

Voluntary commitment to reduce animal productionpublic
70% of German agricultural production (in grain units) is accounted for by the animal production sector, which uses more than 50% of the agricultural land for forage and additionally imports 1/3 of th
Structural change programmes for regions previously strongly dominated by the animal industrypublic
There are several regions in Germany, that are strongly dominated by the animal industry, e.g. the Emsland (Niedersachsen),  Münsterland (NRW), the county of Ludwigslust-Parchim (Mecklenburg-Vorpommer
Import ban for animal feed
About one third of the agricultural products fed to animals in Germany are imported (BMEL). Legume imports play a major role: according to GLEAM, the destruction of the rainforest due to imported soy
Gradual reduction of forage fields
The dominance of climate-damaging animal production in agriculture (cf. [voluntary commitment to reduce animal production](https://wiki.gerechte1komma5.de/tiki-index.php?page=Voluntary+commitment+to+r

Forest and Land Use